China Tea Co., Ltd. Changsha Tea Factory is one of the largest tea manufacturers in China. The company's annual output of various types of tea totals 10,000 tons, and annual sales amount to 140 million yuan (about 18 million US dollars). The products are exported to more than 40 countries. Among them, monkey ace jasmine tea is best known among the world's tea drinkers. Annual production of 4,000 tons of tea in small packages is based on weighing by Ishida's multi-head weighing machine and packaging by VFFS packaging machines. In China, most tea bags are produced in small factories. It is a difficult job for workers to weigh and package tea, and the weight of individual bags is not accurate. The biggest concern for tea manufacturers is how to accurately control the weight of each package according to the hygiene standards and solve the problem of short bags. In order to solve the above problems, the Changsha plant of China Tea Co., Ltd. invested heavily to install China's first automated tea production system. In response, the Ishida multihead weighing machine CCW and VFFS packaging machines helped to achieve streamlined production.

The multi-head weighing machine CCW in Ishida has stable performance, high speed, and high precision, which greatly improves the quality of small tea packaging. The Changsha Tea Factory has established a good image among customers and has achieved satisfactory results in the Chinese tea market. 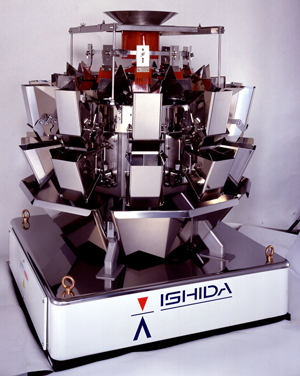 Case:
Equipment provided by Ishida: CCW-NZ-216B-D/20-PB Two sets of products: Small packaging tea before installation: Use 22 general weighing machines made in China to manually pack tea leaves. The Changsha Tea Plant Management Department has made investment in equipment from the perspective of long-term development and has been striving to find ways to increase production efficiency.
Solution: Based on past achievements and sales experience, Shanghai Shi Tian recommended a CCW multihead weighing machine and packaging machine combination system to China Tea Co., Ltd., and configured RS232 interface (optional) to transfer data to the PC and realize the Internet. Network management. It not only emphasizes the accuracy of weighing, but also provides a description of the characteristics that are crucial for the weighing of tea. The system includes a variety of unique features to maximize the performance of the CCW weighing machine. The knowledge gained by Ishida over many years of weighing has finally been recognized by China Tea Co., Ltd.

CCW weighing process:
1) The tea leaves are picked at high places into containers located above the CCW.
2) Then they are fed into the auxiliary feeder.
3) The signal from the CCW commands the tea leaves to feed each CCW through two directional dispersion feeders.
4) The tea leaves in the CCW are unloaded into each funnel (here 16 funnels).
5) The computer calculates the weight of the product in each funnel and instantly selects the funnel whose total weight is closest (but more than the target weight) to the target weight (which can be arbitrarily set).
6) The tea leaves in each funnel selected are discharged into the packaging machine at the same time.

Using the Ishida computer multi-headed weighing machine CCW production tea product with a specification of 100g/bag, working 8 hours a day, the annual output is about 400 tons. Compared with the general weighing machine before installation, it saves 8 people and saves 17.28 tons of raw materials each year.